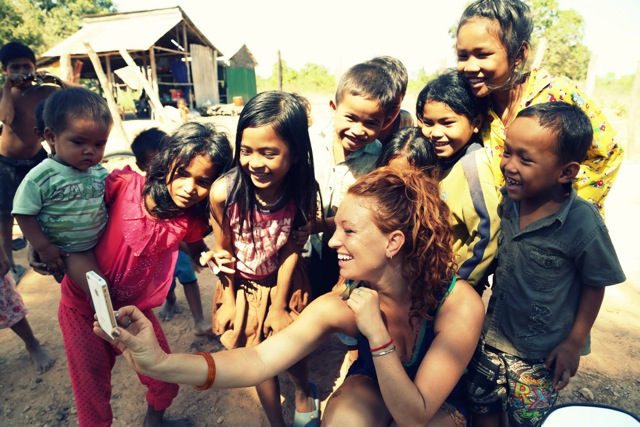 Rachel Riggio went to Cambodia three years with a mountain of a mission.

She wanted to make life better for young victims of sex trafficking in Cambodia, a country that has seen a dramatic rise in sex tourism, the act of traveling to another country to intentionally engage in prostitution.

Riggio and her brother Garrett, whose mother, Nancy Riggio, lives in Rollins, formed The Red Road Foundation to work toward bringing basic resources to children in need around the world.

The foundation is named for the “red road,” a term used in American Indian spiritual teachings to represent one who is walking in balance. “It is behavior, attitude, a way of doing with reverence,” she said.

Their breakout project in Cambodia had an ambitious agenda of creating a safe house, a school and a working farm for children both at risk of being trafficked and victims of the sex trade. While they quickly learned the old adage, “Rome wasn’t built in a day,” held true in Cambodia, they’ve accomplished extraordinary feats in just a couple of years.

Their first attempt to buy land near Koh Kong fell through, but the nonprofit foundation instead bought 3 acres for $4,500 about six hours south of Koh Kong, in rural Kampot.

“It’s a rather vulnerable area, one of the last strongholds of the Khmer Rouge,” said Riggio, who is in the Flathead Valley for about a month before heading back to Cambodia. The Khmer Rouge is the name given to followers of the Communist Party of Kampuchea. It was formed in 1968 as an offshoot of the Vietnam People’s Army from North Vietnam, and is remembered for orchestrating Cambodian genocide.

“There’s no real governance. It’s kind of a free for all,” she said about daily life where she now lives in Cambodia. Families are involved in rice farming, and they’re born into a cycle of working to feed themselves. It’s a community that is susceptible to trafficking.”

As Riggio contemplated the best way to help the children of rural Kampot in the long run, she determined community development was the key to creating educational opportunities.

She and her small crew of volunteers planted 1,000 moringa trees, plants whose leaves and bean pods provide important nutrition to supplement the Cambodian diet of primarily rice.

“We want to make it self-sustaining — of, for and by the community,” Riggio said.

The trees soon can be harvested, and there’s a plan to produce a natural product line of moringa oil capsules as a revenue generator for the community. Mangoes, lemon grass, turmeric and papaya are other products being produced at the farm.

Another huge accomplishment has been the construction of an “Earthship” school, built out of 300 recycled tires and 16,000 recycled glass bottles. 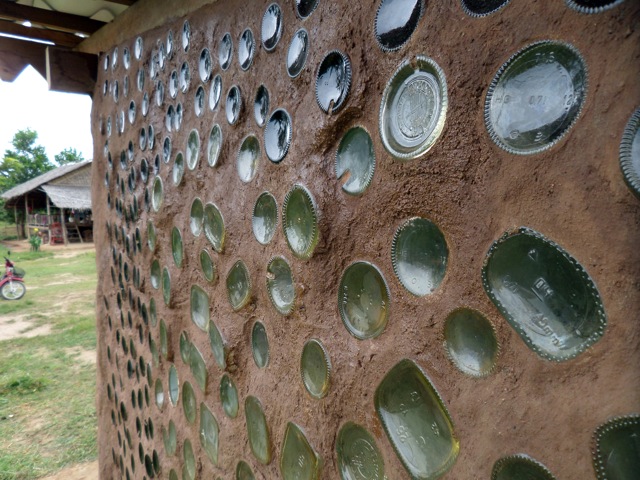 Volunteers came from all over the world and engineers from Earthship Cambodia rallied to create the school from “bottle bricks,” building material created by cutting the bottoms off any kind of glass bottle and using the ends to create walls that resemble stained-glass windows when completed.

Collecting bottles and turning them into bottle bricks is another sustainable, revenue-producing project planned for the community, Riggio said.

Once the school was completed, there was still the task of persuading local families to send their children to classes. Cambodian children are vitally important for helping their families earn enough to survive.

“It’s a big cultural thing for the kids to support the parents,” Riggio said. “We went door-to-door to ask them to let their children come to school.”

As parents realized the overarching opportunity the new school provides for their children, they began allowing their children to attend classes, though the youngsters still must work in the rice fields, too.
They’re eager to learn, though.

“They ask for classes on weekends,” she said. “We’re now doing classes seven days a week.”

The school now has 75 students, taught by teachers who live on the campus in modest bamboo shelters built on stilts. Volunteers from several different countries have offered their skills to the school. 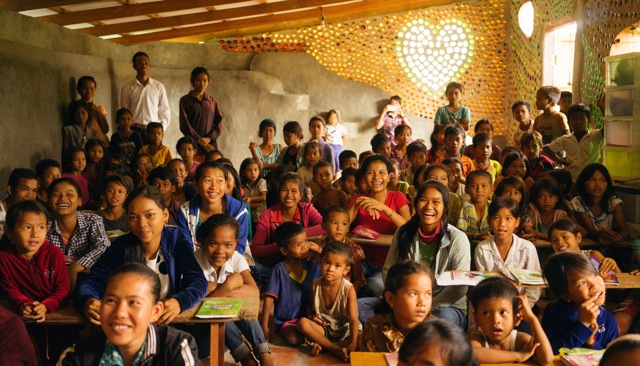 While Riggio has immersed herself in Cambodian culture and now speakers fluent Khmer, her brother runs the fundraising side of the foundation from his home in Orlando, Florida.

Construction of the safe house for trafficking victims is still a couple of years down the road. Riggio is nevertheless very pleased with the progress the foundation has made.

“We want to meet the people where they’re at,” she said. “To empower the kids to be the change.
“It has unfolded so beautifully. I’ve been trying to create this vision of what I want it to look like,” she continued. “I believe in divine energy, and things have been brought into my path when I need them. Something greater is pushing it along.”