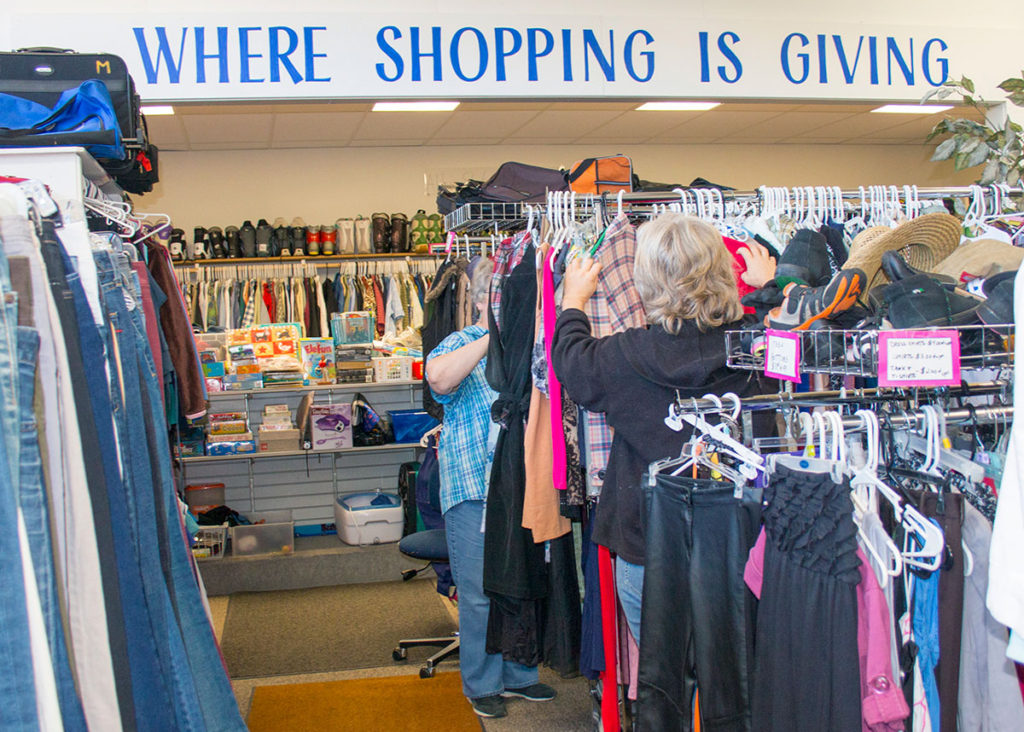 Thrift Haus is a solid source of revenue today.

The Soroptimist Thrift Haus, operated by a dedicated corps of Soroptimist International of Whitefish members, has become a thriving business that allows the club to donate about $200,000 annually to local nonprofits, with a focus on improving the lives of women and girls.

It has been a work in progress since the beginning.

To appreciate where we are today, we can learn a lot from those industrious club members who founded Soroptimist International of Whitefish in 1951.

During the club’s earliest years members conducted various fundraisers to meet the mission, from selling homemade chokecherry syrup to raffles and sponsoring musical groups for concerts.

Roughly 50 years ago the Whitefish Soroptimists saw a need for a retirement home, so they raised money and purchased the “castle” on the hill off Baker Avenue, and operated it until 1973, when the club sold the home and purchased three lots at the corner of Lupfer Avenue and First Street that eventually would become the Thrift Haus location.

For many years the club operated a rummage room next to The Toggery on Central Avenue, again using every penny to fund various community projects.

In the early 1990s, club member Marsha Yarbrough told fellow club member Marge Fisher she sure would like to have the Big Mountain Quick Stop building on the northwest corner of Baker Avenue and Second Street for a thrift store. Marge knew the owner, Adolph Solvie, and made a deal to have the building moved to its current site.

“I drew up some plans and wrote a bid for concrete and a bid to move it,” Marge recalls, remembering the club took out a loan for $21,000 (that included money for a new furnace) and paid it off in about a year.

Many of those early club members and their husbands worked tirelessly to get the old quick-stop in shape for use as a thrift store. The community rallied, providing materials at cost, and organizations such as Whitefish Rotary and even some high school students pitched in, too.

It didn’t take too many years to outgrow the original store space. With Marge at the helm again, club members and the community pitched in to add an addition on the back of the building that is now used as the sorting room. Marge had quite a following of willing volunteers who stepped up to the plate when needed.

The Thrift Haus business continued to grow, and soon a second addition was needed, so Marge again headed up a group of volunteers in the early 2000s to add the addition that is now the men’s and electronic/games room. (That addition originally was built as a sorting room).

In 2013 it was time for some store improvements, so Denman Construction and many local subcontractors donated their time to remodel the thrift store to make it more energy-efficient and create a better flow for customers. The public loved our “Extreme Makeover” that removed the low ceiling tiles and opened up the main room, creating a much better shopping environment.

During that last remodel a “bag room” was added to house the back bags of recycled clothing, and a partition was erected to serve as a screen for dropped-off donations.

Community support has been a key ingredient of the Thrift Haus’ success since Day One, and, in turn, the club has supported so many organizations and individuals in the community.