Soroptimist Whitefish In The News

WHITEFISH - Soroptimist International of Whitefish participates in the 16 days of activism to end gender-based violence every year.

This year they chose to focus on the “Me Too” hashtag that has taken the internet by storm after multiple celebrities have been accused of sexual assault or harassment against female co-workers.

Between Nov. 25 until Dec. 10 the organization has set up cut out women figurines around town with buttons that say “me too” on them. Last Saturday the group stood on corners around town with the cutouts to begin the 16 days of activism.

The buttons are available for people to take and wear to show that they have been a victim of sexual assault or harassment. The cutouts also have a note on them that advocates for those affected to share their stories on the organization's website and blog they have set up for the 16 days.

Diane Yarus from Soroptimist International of Whitefish says focusing on sexual harassment for the 16 days was a timely and important conversation that needs to be had.

“We place the shame on women so it’s things that hold in themselves and they just are told to be thankful that that harassment didn’t lead to something more violent and I think it’s time that we change that storyline and put the shame where it belongs which is on the harasser not the harassed,” said Yarus.

Those figures are still up around town and the organization encourages people to grab a pin and tell their story. 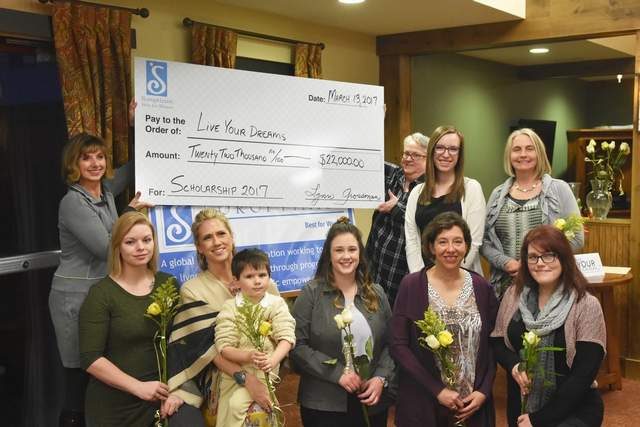 Soroptimist International of Whitefish gave $22,000 in scholarships and awards to women succeeding in all walks of life. (Daniel McKay/Whitefish Pilot)

Ten different women, all succeeding in different walks of life, received a total of $22,000 in education scholarships recently from Soroptimist International of Whitefish.

Soroptimist member Barb Mansfield handed out 10 scholarships for three different awards during an awards ceremony March 13 at The Springs at Whitefish.

The primary award is Live Your Dream, which is given to a woman who is the head of her household and plans to attend or return to college. Four Live Your Dream awards were handed out.

Paula Halama earned the award in the amount of $4,000 and a chance to compete for a regional scholarship. Halama is pursuing a master of science degree in nursing to be a nurse practitioner.

--Read the full article at the Whitefish Pilot-- 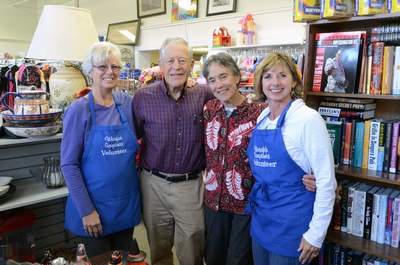 “Doctors without Borders and International Rescue Committee are perfect examples of our mission to empower women and help children,” - Lynn Grossman, president of Whitefish Soroptimist.

For roughly 15 years Sam and Ruth Neff have organized and ran, along with the help of volunteers, an annual fundraiser yard sale at their home.

But this year it became apparent that the demands of the sale, which benefits Doctors without Borders and International Rescue Committee, had become too much and many of their volunteers could no longer assist with the sale.

So the Neffs went searching for a group to take over so donations could continue for the two organizations. The Whitefish Soroptimist club has stepped in to take over the sale, which will now be run out of the nonprofit’s Thrift Haus downtown.

Read the full article online at the Whitefish Pilot. 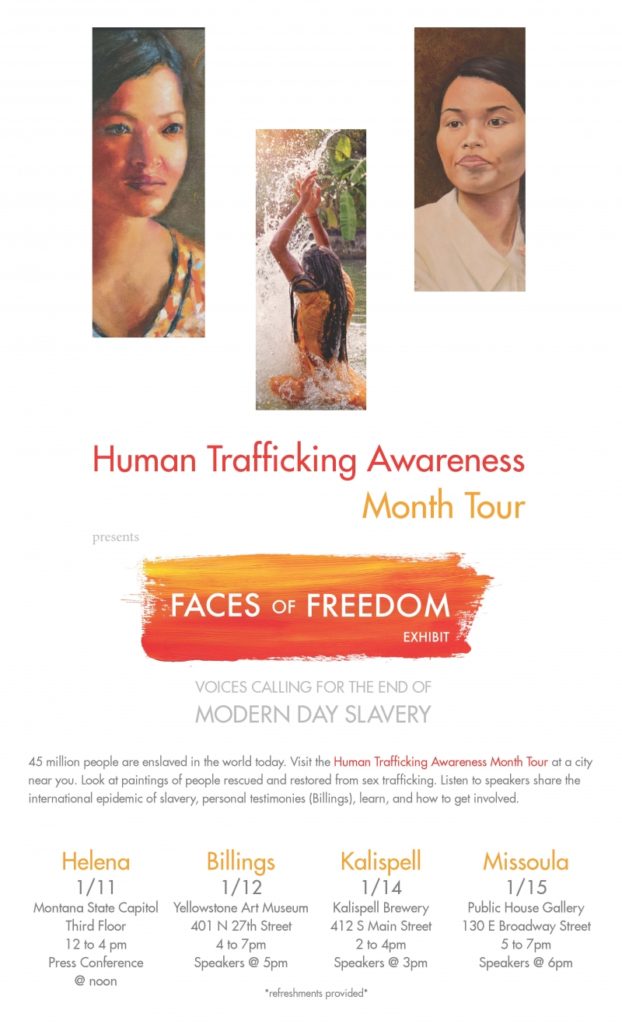 Soroptimist International of Whitefish, in conjunction with the office of Attorney General Tim Fox, is taking a unique art exhibit on a four-city tour of Montana to raise awareness of human trafficking.

The 14-piece exhibit, “Faces of Freedom: Voices Calling for the End of Modern Day Slavery,” is the work of the Freedom 58 Project and features portraits of victims “rescued and restored” from human trafficking. The show’s first stop is Jan. 11 at the State Capitol in Helena, and Flathead Valley residents can view the artwork Saturday, Jan. 14 from 2 to 4 p.m. at the Kalispell Brewing Co. There is no cost to attend.

“All of this, it’s a way to humanize,” said Diane Yarus, chair of the Soroptimist’s human trafficking committee. “These are real people being affected, and the hope is that given the right resources we can rescue and restore people back into the community. That’s the power of the gallery, to make this more human and not in the abstract.”

Yarus and the Soroptimists have worked since 2007 to highlight human trafficking and its frequent consequence, the underage prostitution of young girls.

The group has been involved in advocate work for victims and pushed for tougher laws and penalties for traffickers. Yarus even testified at the State Capitol on behalf of House Bill 89, which was signed into law in 2015.

Read the full article at the Whitefish Pilot 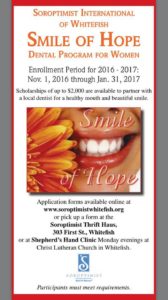 The Whitefish Soroptimist group is continuing its mission to make sure local women have healthy smiles.

The Smile of Hope program was created about 10 years ago and continues to take applications for working women who don’t have access to dental care. The program provides grants of up to $2,000 for those who qualify.

“We are looking for working women who want to improve — go to school or seek a promotion — but their teeth are holding them back,” Joanie Sorensen, coordinator for the dental program.

Soroptimist International is a worldwide women’s organization that works to advance the status of women.

Known in Whitefish for their Thrift Haus, Soroptimist donates proceeds from the store to dozens of Flathead Valley nonprofits with an emphasis on helping women and children.

Read the full article at the Whitefish Pilot.

In a time when few women owned their own business or worked outside the home, a group of Whitefish women began a mission to make their community and world a better place.

Roughly 20 women organized to form the Soroptimist Club of Whitefish. They began raising funds to help women and children.

That was 60 years ago and the Soroptimists are still a driving force here. They’ve raised hundreds of thousands of dollars for local schools, hospitals, libraries, theater, food banks and other non-profits.

Since those early days in 1951 the club. has more than doubled in membership. The club’s Thrift Haus has continued to expand and is their main source of fundraising.

Still it’s a simple idea that the members prescribe to that keeps the club moving.

“There isn’t anything we can’t do,” said longtime member Sally Porcarelli.

Soroptimist International, a business women’s philanthropic organization, was formed in Northern California in 1921. The term “Soroptimist” is derived from the Latin words “soro” for “sister” and “optima” for “the best”.

Put together they represent the “best for women.”

Read the full article at the Whitefish Pilot.